How to Loose A Democracy by Barbara Bridges 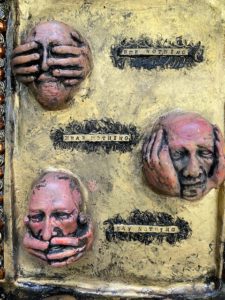 My coming of age included demonstrations against the Vietnam War in Washington D.C.

50 years later, I am still political.

Having been consistently critical of the U.S. government, I am now feeling deeply patriotic – and fearful.

There are 7 billion people on our little planet and I suggest it is a statistical improbability that any one worldview could have found the only valid truth; it is at the very least breathtakingly arrogant. Are the two camps liberal vs. conservative?

It seems more specific than that, it appears to be
Trumpers vs. Never Trumpers.

Communication appears to have stopped.

Collecting data from credible sources appears to have stopped.

When Communication stops. All is lost.