Q&A: Tony Layne talks about the power of design 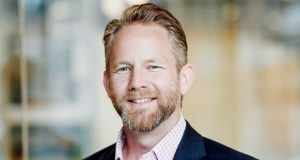 Q&A: Tony Layne talks about the power of design

Whether it involves taking sustainability to the next level or building the perfect seaworthy vessel, Minneapolis architect Tony Layne believes in the power of good design to make the world a better place.

As a youngster, the managing director of Perkins and Will’s Minneapolis office learned some enduring lessons to that effect from his grandfather, who designed, built and repaired wooden sailboats.

“There’s something about a sailboat where every cubic inch of space is accounted for and useful,” Layne said. “It’s this sort of perfect blend of art and science and how it all goes together. So I think that was really the first kind of spark for me.”

A graduate of the University of Minnesota’s Masters of Science in Sustainable Design program, Layne has kept that spark alive in his 20-plus years at Perkins and Will. For the past four years, he has been managing director of the Minneapolis studio, which recently won the prestigious “Firm of the Year” award from the Minnesota chapter of the American Institute of Architects.

The firm was honored, in part, for its commitment to innovation, sustainability, and a “front-loaded, collaborative and inclusive design approach,” according to AIA Minnesota.

In the following interview, Layne talks about the award, the future of sustainable design, the key to attracting and retaining the best talent, and the core values of the Minneapolis office.

The interview has been edited for length and clarity.

Q: Congratulations on the award. What are your thoughts?

A: We were very honored and humbled by the peer recognition of the AIA to recognize the work we’ve been doing, where we’ve been headed and the values and mission of our studio. So we were very, very excited to receive the award.

It helped us to focus as well on where we’ve been, but more importantly, where we’re hoping to go over the next the next years and decades ahead in the work we’re doing.

A: As a core value of the firm, it’s been critical. I think now we’re moving into that next evolution of what that looks like. As you said, everybody thinks sustainability is important. But what does that actually mean now beyond LEED certification on a project?

Sustainability really used to be about mitigation. It was, if we don’t do something now, things are going to get bad — climate change, stuff is going to happen. We need to prevent this from happening.

And I think the reality of the world now is that things are bad in a lot of ways. Things have changed. And it’s not just a mitigation strategy, but it’s an adaptation strategy. And one of the ways we think about that is in terms of resilience.

And actually, our studio here developed RELi, the new resilience design guidelines that USGBC has now picked up and is using as a part of the LEED certification. That certification was actually written right here in Minnesota in our studio with our staff doing it.

We want to continue to push because we’re not where we need to be yet. At the very, very least we need buildings to be carbon neutral. At the best they are carbon negatives; they’re pulling stuff out of the atmosphere. So that’s where we’re headed, hopefully.

Q: What are some of the projects you’re currently working on?

A: We’re currently designing the new Kenosha, Wisconsin, City Hall. That is a project we’re excited about. We do a lot of health science and medical education work, so the new Health Science Building over at the University of Minnesota is another project that is emblematic of the type of work we’re doing.

People hire us because they have a complex problem and not because there’s something simple to do. And that’s where we thrive. We love that kind of work.

Q: You mentioned that you just added a few people. There’s pretty intense competition out there to get the best and the brightest. How do you position your firm to be an attractive place to work?

A: Culture is incredibly important to us. And it’s something we focus on extensively. A culture of empathy, a culture of transparency, a culture of growth and development — these are all things that we want to be part of our studio. We work hard to make sure that folks are really engaged and happy as a part of what they’re doing.

I’ve been here, basically, my whole career. I never felt like I needed to go anywhere else to get to do whatever it was that I wanted to do next.

And so we’re looking for folks that are entrepreneurial, and they’re passionate about great design. We really value inclusivity and diversity in all that we’re doing and continuing to try to be, to push that further and be better. It’s really a model of continuous improvement.

Q: What attracted you personally to the architecture profession?

A: My grandfather built sailboats, wooden sailboats. And so every summer I learned a lot of woodworking skills from that and every summer we would either build a boat or we’d pull one out of the lake and rebuild it.

And then I was also always the guy sketching in the back of the class. So I was interested in drawing and sort of the visual arts piece of it and this was kind of the perfect blend of those things.

Those are the reasons I got into it. The reasons I’m it now — honestly, I think we’re at a moment in history that we’ve got we’ve got a responsibility and an opportunity to affect the world in bigger ways than we ever have. I think the challenge is greater right now than it’s ever been.

You think about all of the major issues facing society, whether that’s climate change, or homelessness. Whatever the issue, design has an opportunity to transform lives. And I believe that it can for the better. That makes it meaningful to me.