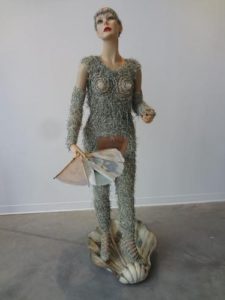 Artist Statement
“We are so much more than this…”
The Delta of Venus uses stereotypes and deeply embedded beliefs about women and their cultural, social and economic “value” to question the status quo and challenge convention. And, it temps the viewer to consider the difference between value and worth, and how an understanding and acceptance of that distinction has the potential to impact the lives of women – and communities – worldwide. 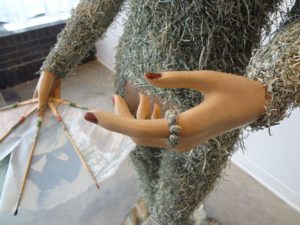 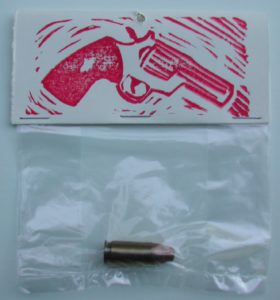 This piece could have been written Monday, October 2, 2017 after the mass shooting

Jill Waterhouse
Artist Statement for the 2004 Exhibition “Banned” at MCAD

The Bad Seed takes as its source of inspiration Lester Joos’ prose poem, “The Seed,” which is an intimate reflection on the fascination of two boys who find a bullet in the street. Like Joos’ poem, this collection of 36 “seed packets” is both a commentary upon, and examination of, this glamorization of guns and violence in American culture.

As you sow, so shall you reap.

If you glamorize violence, you breed violence.

Over the last ten years, we have reached the point that we can even parody our fascination for “weapons and warfare” through films such as “Pulp Fiction” and “Kill Bill.”

Ironically, I am not opposed to guns per se, though I choose not to own one. I grew up in a family of hunters, after all. Men (and women) who had a deep and abiding respect for guns and gun safety – and who knew first hand the tragedy of even the most honest mistake when using a gun. (My uncle Del lost his leg in a freak hunting accident.)

But, it makes me uncomfortable – and incredibly sad – that I live in a country with a world view that values oil over people, and will spend billions to go to war for that oil when its own citizens can’t get health insurance, can’t afford housing, and sometimes don’t know where their next meal is coming from. And then, the “powers that be” can’t understand why we have so much violence in our cities. They use violence to get what they want… as you sow, so shall you reap…

As Stephen Colbert so aptly pointed out after the Las Vegas tragedy, every time we’ve had a mass shooting in America, the politicians on the right say, “This is not the time for a political discussion on gun control. There is a time and place, but this is not it.” Since it never happens afterwards either – in part because there is no afterwards – mass shootings (defined as over 4 people being shot) are happening every 9 out of 10 days in America. There were 300 in the last year…  So, please tell us, for God’s sake and for that of the children of Sandyhook and for every other school, home and hotel in America, when IS the right time?

Two kids approach me on the sidewalk, heads together, their voices low and eager, passing an object from hand to hand. One of them insists:

“No, this part what goes flat – goes to pieces inside.”

I caught the quick gleam of silver, turned on my heel:

They make no pretense to hide it, the nearer boy shows it to me – awkward but faintly proud, his young fawn eyes turned to me, his soft brown child cheek – inviting target for a mother’s kiss, says simply,

Am I shocked? Not really. I know this thing – intellectually. It‘s just ammo. Shock is what the bullet does to the body. Hydraulic shock. This ephemeral, soul-infused bag of bones and blood and skin is 85% water. The sticks make the water stiff, the skin holds the water in.

The movies try and try to get it right. The exact look of surprise, composed of equal parts of comprehension and disbelief – “I’ve been shot!”

Maybe, for some steel-jacket round that they dig out of a wall after it perforates your lung with the most conservative of holes – almost no blood, the wound sealing itself so you can still breathe. Maybe. But this bullet expands, turns from a sharpened arrow to a blunt fencepost a nanosecond after piercing your flesh, spending its energy – every ounce, on stopping inside your body. This is no Olympic diver slipping seamlessly into the pool. This is hollow-nosed hell, one fat fucking bully barreling off the high board – doing  a cannonball that explodes in your gut, in this bag of water that suddenly needs to expand, everywhere, and all at once.

Your liver, suddenly liquid, sends a tidal wave rushing down your intestines, slamming into your bowels – that meet that tsunami with all the modesty and restraint of a blown Tijuana sewer. Simultaneously, the shock wave sloshes your brain in the pan – the subtle and myriad synapses on atomic override, the light itself reversing and gleaming out of your eyes – or perhaps it’s just your soul, slipping out of this soggy sack, opting for the great celestial everywhere – anywhere but here, because there, slumping to it’s knees, goes the neighborhood.

And here, pants slung to their knees, go my hooded neighbors – passing the seed, the gutter-sown seed, between them. I can hear it growing. 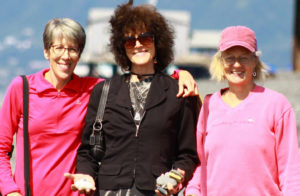 Jill Waterhouse  (the one in the middle) has been a practicing artist for over 35 years, as well as a published author, performance artist, community activist and curator. Her work is primarily sculpture, installations and perfomance/social practice art. She has exhibited extensively in museums, galleries, and alternative spaces in the United States, including the Walker Arts Center and Mia, her home town arts institutions. Her work was also included in the 1995 NGO Forum exhibition in China.

Waterhouse has been heavily involved in a number of large community/social art projects and public performances. She has been a long time member, mentor and former director of WARM (Women’s Art Resources of MN) and a long time member and chapter president/co-president of WCA MN (Women’s Caucus for Art MN). She has also been involved with the Art Car and Art Shanty Projects for years, a member of “What We Need is Here,” an environment and arts group at The Phipps in Hudson, Wisconsin. She has received grants and awards from the Metropolitan Regional Arts Council, and the Minneapolis Arts Commission. McKnight/Annenberg/Horncrest Foundations.   Artist  Minneapolis, Minnesota