Can’t Wash it Away 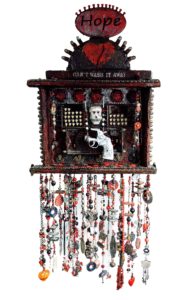 “Can’t Wash it Away” explores the social impact of suicide by gun and how it effects those left behind and was created as a response to a gun buy-back project and a partnership between the Minneapolis police and Minnesota artists. Pieces of the dismantled guns were used as a catalyst to create works focused on gun violence.

My research revealed that citizens of the United States own over 50% of the guns on our planet of 7.7 billion people. Why?  The population of the United States is 330,000 million.  The U.S. homicide by gun statistics are frightening – over 14,000 in 2016  – but the research that knocked me off my chair was the suicide by gun statistics – over 20,000. Who chooses this exit and why?