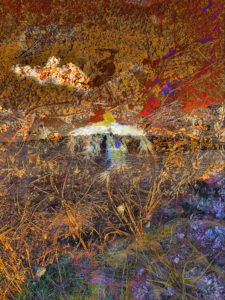 I am a hyper inventive geek, exploring and abusing artistic mediums, with the deepest knowledge in fibers, dyes, and iPhone apps. I fuse color and texture into meaning. I rambunctiously play with imagery and motion using anything I can find. I use fiber content with its drape; dyes and paints with their specific colors; and apps in the iPhone for their meaning. I am curious and cross-sensed. I see music’s patterns and shapes; I touch between spaces and time; I smell emotion. Order is a glommed ball where I need story, or tree roots unraveling it. Only then can I see its pattern and motion. I can show what it is I see, hear and sense with fiber content’s motion, using color, and with the phone’s photo apps. I want everybody to smell what I see, and taste what I know.Physics, now, has the words and theories that I’ve sensed my entire life – multi-layered universes, dark matter, and gravitational waves that traverse as branches and leaves or as neurons in the brain. These concepts, and their shapes can translate what I see into a working reality.My favorite art works are the cave paintings, shaman works, and over 6000 years old pieces in China, Old Europe, Africa, the Americas. Chagall is my favorite painter. Erte, Zandra Rhodes, Issey Miyake and Alexander McQueen are my wearable artists influences. 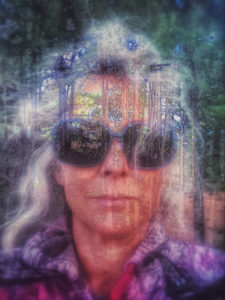 I feel my work is closer to Outsider Art in its unspoken spiritual content, in contrast to our culture’s values that are destructive to nature. Nature is cooperative in the “circle of life”. Death and growth are a whole, a flow, a movement in balance. Grace and Beauty can be chosen at each breath. I want my work be the healing beauty, a natural force that audiences participate in. 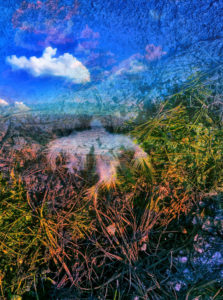 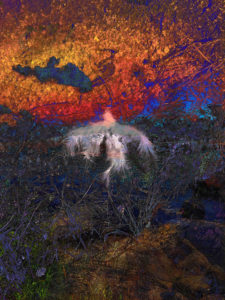