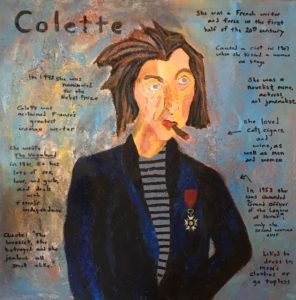 Colette was a force in the first half of the 20th century. She wrote novels, performed on stage, was a journalist, and pushed the envelope on society’s mores and norms. She was interesting, thoughtful, and I like to think she might be fun at a dinner party.

My artistic eye has been shaped by various life experiences; some positive, some negative, and some just hard to sort out.

I work out of my studio in Minneapolis, Minnesota. I am first-generation Irish; my father’s parents lived in or around County Sligo before immigrating to Scotland then to America in 1920. Raised in Pittsburgh, my background is completely blue-collar, as my father was a steel-worker. I know what it is like to sit in a bar surrounded by men who just left the mill, each drinking beers and shots.

Following four years in the  Marine Corps during the Vietnam-era, I lived very close to the bone, with little money, drinking and using drugs, making at-risk decisions, until I attended college.

Pink hats were much in evidence as an extraordinarily wide range of groups came together to repudiate language and policies against women on January 21, 2017, the day after the inauguration of the president of the United States. The Women’s March became the largest worldwide protest gathering in history. I was fortunate to partake in the march to the state capital in Minnesota.

I have worked in boatyards. I have built grottos and fences out of fieldstone. I circumvented Easter Island on horseback while partaking in healing ceremonies to save the Earth. I have taught in the elementary classroom for a couple decades, which is the hardest work I ever did. I am presently a trauma response coordinator, dealing with student deaths, suicide, and grief.

Each of these experiences has shaped my artistic eye and motivation.

Always an artist, I began seriously painting in 2011. I took up painting as a way to deal with crisis in my position as a trauma response coordinator.

I have been fortunate to have pieces of my art selected for shows in New York and Louisiana, among other places. As an emerging and self-taught artist, I have accomplished much and look forward to continued artistic growth. 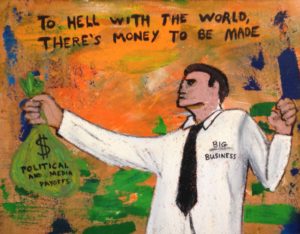 The quasi-religious practice of capitalism in Western society has impacted all peoples, environments, and ways of life, mostly in negative ways. We see extremely high CEO compensation with a small number of people controlling most of the wealth. On Wall Street, a center of capitalism, criticism is dismissed by claiming the common people do not understand the complex, important, multilayered financial transactions they do, which allows the super rich to accumulate even more power and wealth. 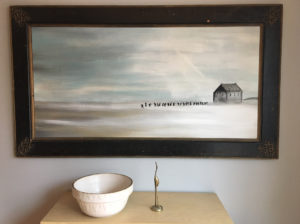 I was in Newfoundland in 2015. Newfoundland is about as far east as you can go in North America and it is way up there in latitude. Unique culturally, it is a beautiful land of rock, fisherman, whales, and icebergs. Beginning in 1954, the Canadian government resettled, controversially, thousands of citizens who lived in isolated communities. Some families actually pulled their homes across frozen bays or they waited till summer and floated the houses on barrels, which was a chancy proposition with waves and seas.

2015-17 On-going gallery shows out of my studio, Minneapolis, MN 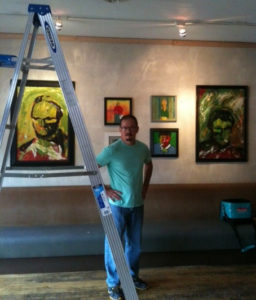 I am intrigued by ideas of other dimensions and things difficult to explain. Things that have had a history, which have been touched by joy and sorrow, which are slowly falling apart, intrigue me. I am drawn to old abandoned buildings and farmhouses faces, and the untold stories each holds.   Artist  Minneapolis, Minnesota