A scientist by training and curious by nature, Walt started in the late 1960s and early 1970s working with repeated patterns and optical illusions, influenced by M.C. Escher and others of the Op Art era.

He set up a T-square with saw blade for its notches, and triangle with bent paper clip holding a template to advance notch by notch, using Rapidograph pens to create lines close together.

Later, during the 1980s living in Northeast Minneapolis, he created a setup that allowed repetition of photographic wedges with soft and somewhat overlapping edges, yielding beautiful mandala-like images.

Once introduced to Photoshop, Walt began playing with its capabilities to repeat and bookmatch patterns kaleidoscopically. He samples existing photographs, photographs scenes and items found in nature or everyday objects, eventually distorting some of the images such that just the colors are left to be repeated.

A graphic that asks, “What have you done lately?” hangs to the side of Walt’s computer station, encouraging constant experimentation. A new body of work would be made for a rural Wisconsin library exhibit about every two months for many years. It was a retirement project shared with his late wife, Maxine.

All works are one of a kind. The art has included series inspired by barn quilts, tiles, random numbers, patterns made from people’s names, bar codes, and more.

Recently, as Walt observed his 91st birthday, Facebook friends and family have been supplying images, amused at what Walt does with them. He posts these experiments online but no longer makes prints or exhibits. He is divesting his mid- and late-career work to benefit the causes supported by friends and family. 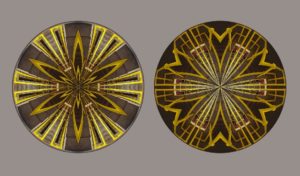