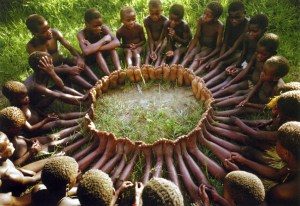 Ubuntu is a Nguni Bantu term roughly translating to “human kindness.” It is an idea from the Southern African region which means literally “human-ness,” and is often translated as “humanity toward others,” but is often used in a more philosophical sense to mean “the belief in a universal bond of sharing that connects all humanity”.According to Michael Onyebuchi Eze, the core of ubuntu can best be summarized as follows:

“ ‘A person is a person through other people’ strikes an affirmation of one’s humanity through recognition of an ‘other’ in his or her uniqueness and difference. It is a demand for a creative intersubjective formation in which the ‘other’ becomes a mirror (but only a mirror) for my subjectivity. This idealism suggests to us that humanity is not embedded in my person solely as an individual; my humanity is co-substantively bestowed upon the other and me. Humanity is a quality we owe to each other. We create each other and need to sustain this otherness creation. And if we belong to each other, we participate in our creations: we are because you are, and since you are, definitely I am. The ‘I am’ is not a rigid subject, but a dynamic self-constitution dependent on this otherness creation of relation and distance”.

“Ubuntu” as political philosophy has aspects of socialism, propagating the redistribution of wealth. This is similar to redistributive policies in liberalism. This socialisation is a vestige of agrarian peoples as a hedge against the crop failures of individuals. Socialisation presupposes a community population with which individuals empathise and concomitantly, have a vested interest in its collective prosperity. Urbanisation and the aggregation of people into an abstract and bureaucratic state undermines this empathy. African Intellectual historians like Michael Onyebuchi Eze have argued however that this ideal of “collective responsibility” must not be understood as absolute in which the community’s good is prior to the individual’s good. On this view, ubuntu it is argued, is a communitarian philosophy that is widely differentiated from the Western notion of communitarian socialism. In fact, ubuntu induces an ideal of shared human subjectivity that promotes a community’s good through an unconditional recognition and appreciation of individual uniqueness and difference.